“Inspiration vs Appropriation: Well-known Trademarks in Hong Kong, China and around the World” - a collaborative presentation by DVC and DLA

Differences between satire, parody and pastiche as well as the phenomenon known as Shanzhai were discussed in a joint IP presentation featuring DVC's Winnie Tam SC, JP, CW Ling and Stephanie Wong and their counterparts, Ed Chatterton and Liam Blackford from DLA Piper. In a seminar entitled "Inspiration or Appropriation: Well known Trademarks in Hong Kong, China and around the World, DVC and DLA joined forces on 17th October to home in on these topics and more before an engaged audience made up of over 50 in-house counsel and solicitors.

After opening remarks by Winnie Tam SC, JP, Stephanie kicked off by providing an overview of the factors that made up well known trademarks, and the conditions of infringement. She also discussed the concept of dilution in the context of economic behaviour, commercial magnetism and genericide. As regards genericide, she cited the example of Pepsi's slogan, "dying for a coke, take a Pepsi." And in a memorable quote about Louis-Vuitton's 'designer paper offerings' which pays homage to the dead, Stephanie quipped that people in HK not only "lived by Louis-Vuitton but seemingly died by the brand as well."

CW Ling discussed the need for a link and for a change in consumers' behaviour in the context of infringement. Establishing a link necessitated a degree of similarity so as to call an earlier mark to mind. He cited the LV case. He also elaborated on the elements of Encoding, Recoding and Decoding and provided interesting examples of Parodising vs Recoding Trademarks in the context of McDonalds and Starbucks.

In an animated presentation that hewed closely to the images contained in her presentation, Winnie took the audience through several jurisdictions to show different stances taken: in the US she referred to a more liberal approach whereas in the UK and the EU, more conservative stances were adopted in the context of granting/refusing to grant injunctions for infringement. A standout example was the Lady Gaga vs Lady Goo Goo case (Ate My Heart v Mind Candy Ltd [2011] EWHC 2741 (Ch) where Lady Gaga successfully obtained an injunction to stop the Defendant from releasing a song called The Moshi Dance. Vos J took the view that that the parody defence was not available. Winnie also spotlighted cases from South Africa, the EU, Hong Kong and the UK.  A short video featuring the jarring and colourful song Barbie Girl by Aqua was played during the presentation. This was an example of when the Courts dismissed a lawsuit filed by Mattel for infringement in the case of Mattel v MCA Records, 296 F.3d 894 (9th Cir. 2002).

Ed Chatterton from DLA homed in on Shanzhai or counterfeit consumer goods, citing some amusing examples that included Pizza Huh, KFG (instead of KFC), Adidos and Buckstar Coffee. And Liam wrapped up by taking the audience through the Michael Jordan v Qiaodan case, the Lafite case and the Xinhua Zidian case  - the latter pertaining to unregistered TMs, infringement and unfair competition. He concluded with a helpful summary of the vital takeaways from each case and moderated some thought-provoking questions from the audience after the seminar.

It was an entertaining and lively presentation and DVC would like to thank DLA for providing a lovely venue for the event. 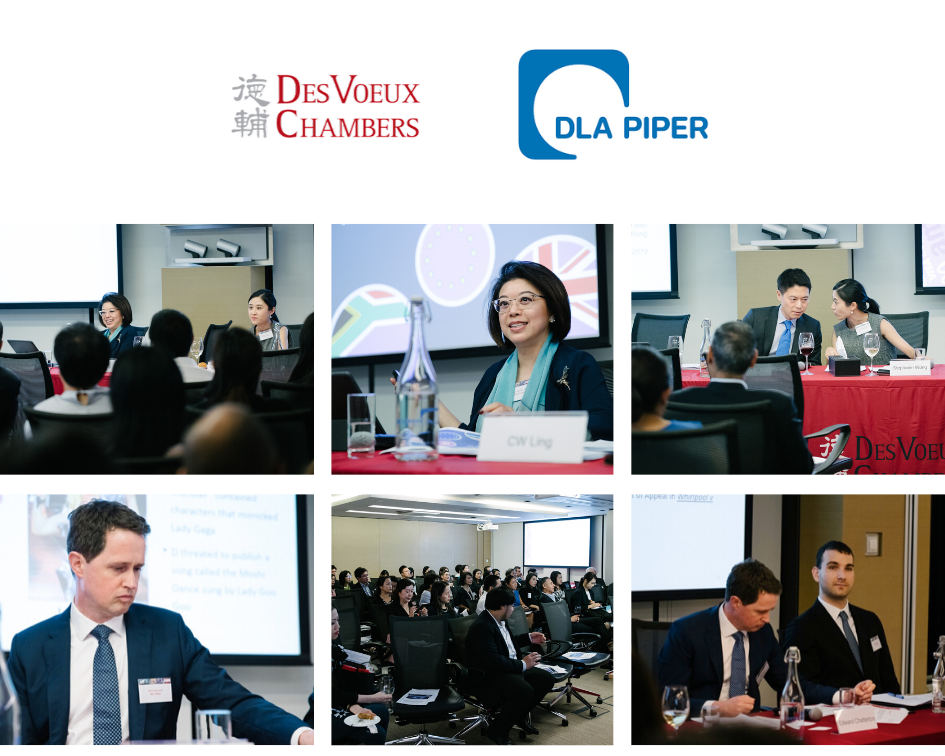