DVC is proud to be at the forefront of this rapidly developing area of the law. Our members have appeared in many of the first landmark cases in Hong Kong on competition law and regularly advises corporations on competition, regulatory and other related issues. Combined with our wealth of experience and expertise in public and constitutional law, commercial litigation, as well as dealing with regulatory authorities such as the Securities and Futures Commission and the Communications Authority, we strive to become the preeminent set for all competition law related matters in Hong Kong.

Our members practising in competition law are:-

Catrina is ranked as a Tier 1 leading junior in the Competition section of The Legal 500 and has been “widely identified as Hong Kong’s front runner for competition matters, having had the lion’s share of the cases so far heard”. She "stands out” for her “depth of knowledge of competition law in Hong Kong, the US and the EU” and is in demand for her “sharp legal mind and provision of clear, punchy advice”, “quickness on her feet”, and as a “practitioner who thinks outside the box”.

She has acted for and accepts instructions from both regulators and respondents in competition proceedings and regularly advises undertakings on competition issues generally, as well as on investigations of suspected breaches of competition rules.

She has advised undertakings from a wide range of industry sectors including telecommunications, raw materials, banking and financial services, beauty and cosmetics, real estate and construction, as well as trade councils on a broad spectrum of competition issues.

Catrina holds a Master of Arts in EU Competition Law (Distinction) and a Postgraduate Diploma in Economics for Competition Law from King’s College London. In 2016, she undertook a secondment to Monckton Chambers, a leading London set specialising in competition law.

John obtained a distinction in the competition law paper in his BCL degree. He has been actively developing a competition law practice in Hong Kong. In 2015, he acted as junior counsel for the Communications Authority in Hong Kong (led by Mark Hoskins QC from Brick Court Chambers in London and Johannes Chan SC from Denis Chang’s Chambers) in a judicial review, culminating in the Honourable Mr. Justice G Lam’s judgment in Television Broadcasts Limited v Communications Authority & The Chief Executive in Council [2016] 2 HKLRD 41, a landmark decision in Hong Kong discussing the general principles of competition provisions  and other important issues such as the standard of proof in competition law proceedings. In January 2016, he was appointed to the Hong Kong Competition Commission’s Panel of External Counsel. In October 2016, he was selected by the Hong Kong Bar Association to undertake a secondment at Brick Court Chambers, a leading London set specialising in competition law.

Connie studied Competition Law at the University of Oxford whilst doing her BCL. Since 2016, she has been on the Competition Commission's Panel of External Counsel in Hong Kong. She was also selected by the Hong Kong Bar Association as one of the four counsel to undertake a secondment at Brick Court Chambers in London where she spent two weeks with Mr. Robert O’Donoghue, a leading competition practitioner.

She represented one of the parties in a 4-week trial before the Competition Tribunal: Competition Commission v. W. Hing Construction Company Limited & Ors, CTEA 2/2017, the first case on market sharing and price fixing as well as determination of penalty in Hong Kong. She is recently involved in Competition Commission v. T.H Lee Book Company Limited & Ors CTEA 2/2020, an enforcement action on alleged price fixing and bid-rigging involving textbooks for secondary schools .

She has a broad commercial and civil practice, with particular interest in land disputes, company and insolvency matters, property and trusts claims, as well as regulatory and public law cases. In addition to appearing in arbitrations regularly, she is an HKIAC Arbitrator. She joined DVC in 2012 after graduating from Oxford with a BCL and ranking first in her LLB degree at Hong Kong University.

She specialises in Competition Law during her Master's degree at Oxford University, and has given talks on the new Competition Ordinance upon her return to Hong Kong.

Martin is a Rhodes Scholar, and is also a Bar Scholar and a Charles Ching Scholar. He obtained a Distinction in the postgraduate BCL degree at the University of Oxford (during which he read competition law), after graduating at the top of his HKU LLB class with First Class Honours.

Martin's practice covers both advisory and advocacy work in a broad range of civil matters, including competition law. He is also a Committee Member of the Hong Kong Bar Association's Committee on Competition Law.

Kelvin specialises in competition law as a practising barrister in DVC and an academic at the University of Hong Kong, where he continues to teach and research in competition law. He has considerable experience handling competition law matters involving dispute resolution, exemption/exclusion-related applications, and advisory/consultancy work (including pre-IPO opinion). He has advised the Hong Kong Competition Commission and private parties in various sectors of the economy (including the financial, media, professional and retail sectors). He was an ad-hoc consultant to i-Cable in the Communication Authority’s Preliminary Enquiry (OFCA/M/BO2/1-12) leading to the early 2016 decision that i-Cable had no case to answer.

Jonathan joined Des Voeux Chambers in 2015. He studied Economics at the University of California, Berkeley, and graduated with Distinction. Following this, he obtained his JD degree from the University of Hong Kong with First Class Honours and his LLM degree from the University of Cambridge, during which he read competition law. He has a broad civil and commercial practice, with an emphasis on construction, company, insolvency, bankruptcy, competition, trusts and land matters. He regularly appears in the Court of First Instance and the Court of Appeal, both in his own right and as junior counsel, and routinely receives instructions for advisory work.

Stephanie accepts instructions for both advocacy and advisory work and has been instructed on matters covering a wide range of areas of law. Her practice covers general Civil, Commercial, Intellectual Property, Competition, Chancery, Public Law and Arbitration. Prior to joining the Bar, Stephanie has read and obtained distinctions in EU and UK competition law at the University of Oxford and US antitrust law at the University of Hong Kong. She was also a research assistant to Mr. Thomas Cheng (competition law specialist and a member of the Hong Kong Competition Commission) and has conducted research on diverse competition law issues.

Stephanie is a Lecturer (Non-Clinical) at the Department of Law of the University of Hong Kong. She is also currently serving as a Member to two Practice Area Committees of the Hong Kong Bar Association, namely the Committee on Intellectual Property Law and the Committee on Competition Law.

Cherry is developing a broad practice in civil and commercial law, including competition law. She has been involved in both advisory and advocacy work in relation to competition law.  Prior to joining the Bar, Cherry has read competition law as part of her BCL degree at the University of Oxford and obtained a distinction in the subject.

Tommy Cheung is a Bar Scholar. He joined Des Voeux Chambers in 2017 after obtaining a Distinction in his BCL from the University of Oxford, with a prize for best performance in Corporate Insolvency Law. He also received First Class Honours  in both his LLB and BBA (Law) (Majoring in Accounting) from the University of Hong Kong, ranking first in his year.

Tommy appears regularly in the High Court as an advocate in his own right and as junior counsel. On top of advocacy work, he advises on a broad range of civil matters, including competition law. He was a research assistant to Mr Thomas Cheng (competition law specialist and a former member of the Hong Kong Competition Commission) and has conducted research on diverse competition law issues. He has also given talks on a wide range of legal matters, including the Competition Ordinance (Cap 619). He represented one of the parties in a 4-week trial before the Competition Tribunal: Competition Commission v W Hing Construction Co Ltd and Others [2020] 2 HKLRD 1229; [2019] 3 HKLRD 46; [2018] 5 HKLRD 437 (the pioneering case on market sharing, price fixing and determination of penalty in Hong Kong, with Ms Connie Lee).

This junior maintains a diverse practice across a range of commercial litigation instructions, and is held in particularly high esteem for her accomplished competition law practice. “She would be the name I would highlight at DVC; she’s really cornered the competition law market well and is doing some interesting stuff there,” She is  “highly thought of” at the Hong Kong Bar, and singled  out as “very reliable for fact-heavy cases.”  “She is great for matters which concern very difficult facts and evidence – scientific facts and things beyond our knowledge. She’ll spend a lot of time speaking to the experts, so she can explain things in a way that everyone in the court can understand.”

"She stands out and is gaining particular experience in this space."

"She has been involved in the first ground-breaking cases in competition law in Hong Kong, quickly becoming one of the go-to barristers in this area in Hong Kong - she is well positioned to take the market by storm."

This junior is widely identified as Hong Kong's “front runner for competition matters,” having “had the lion's share of the cases so far heard” and being a member of the Competition Commission's panel of external counsel. She received a nod for her “sharp legal mind and provision of clear, punchy advice” and was noted for the “particularly impressive calmness and ability of quick response” she shows when “surprising or difficult issues” are raised in the courtroom.

Singled out for the “well-balanced variety of his broad practice which incorporates noted skills in such diverse areas as competition, defamation and insolvency, this up and coming junior is further acknowledged for being “very accessible and friendly” and “on the way up” and is already developing a clientele in his own right.

This standout junior has “monopol[ised] the market” in competition law given her depth of knowledge of competition law in Hong Kong, the US and the EU. She is admired as a practitioner who “thinks outside the box and always tests the limits of the evidence, is not afraid to tell solicitors and clients when they have a bad case and can be a fighter – but always at the right moment.”

Recognised for his varied range, particularly in insolvency, director’s duties and competition issues, solicitors are impressed by his consistent readiness to “come up with new ways of tackling an issue” [even with] “very messy evidence” [He has a distinct ability] to “effectively put across to the client his very clear, clever ideas and solutions.”

Appearing in the first case to be considered by the new Competition Tribunal, this Silk is esteemed for being “an excellent strategist and a most effective advocate who knows how to package a case and what points to push.” A favoured choice in judicial review cases, he is also sought after for technology related and competition disputes.

“One of the very few Hong Kong barristers with experience of handling competition cases,” she is particularly known for “quickness on her feet ” and her “instinctive recognition of when to advance and when to retreat.” 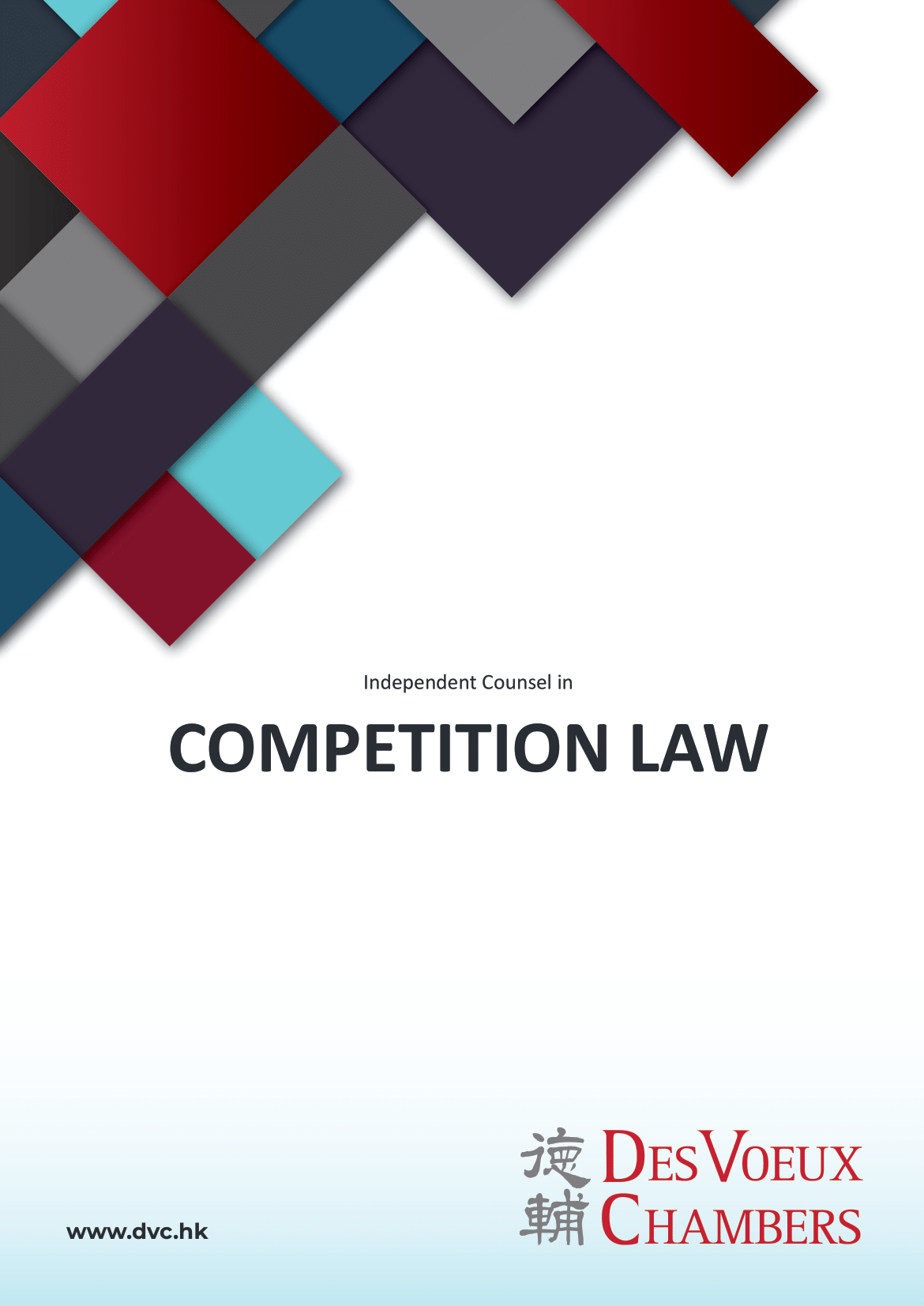