DVC houses a large number of specialists in company and insolvency law, with several of its members being co-authors of leading company law texts in Hong Kong.

One of the current Companies Judges is a former member of DVC, and our members are frequent visitors to the Companies Court in both contentious and non-contentious matters, a recent example being the proceedings relating to the proposed privatisation of PCCW.

Our members frequently appear in a wide spectrum of company disputes, including shareholders disputes, joint venture disputes, liquidation and winding up litigations.

These cases, which feature head notes produced by DVC's members, span the period between 2008 - 2019, inclusive.

DVC's William Wong SC, JP and Look-Chan Ho are the co-editors and the Hon. Mr. Justice Harris is the Honorary Chief Editor.

With contributors hailing exclusively from Des Voeux Chambers, DVC is the first mover in this space and the only Chambers globally to have authored a compendium of this kind.

Applauded for being “basically, the god of insolvency law in Hong Kong,” this silk is described as being “in his prime.” He is also accredited for being “very quick-witted, [and an] extremely effective advocate” who is particularly “good at coming up with incisive responses to questions from the Bench.”

This new Silk is recognised for being “preferred counsel of a number of leading liquidators and professional trustees and is very much front and centre in the market.” She stands out in particular for her “expertise in the insolvency sphere.”

This “busy and popular company law specialist” has gained prominence for his “academic grasp of the subject, and is credited for being a “really practically-minded adviser and advocate in the company and commercial field.” He is acknowledged for being a “sound tactician with a keen sense of strategy” who “knows how best to play his cards in an adversarial case.”

This silk attracts praise not only as a “very experienced” and “smooth yet forceful advocate who knows how to cut to the chase,” but also for a breadth of practice which incorporates particular strengths in company law, restructuring and insolvency issues and matters arising in the banking industry. He is also “increasingly involved in matrimonial cases with company aspects.”

Singled out for being “good in every area he acts in,” and “one of the best all-rounder silks for corporate or commercial litigation, particularly those involving shareholder disputes,” he is further characterised as “fantastic with clients, responsive to those instructing him and a pleasure to work with,” and as “a robust and very tough advocate who prepares extremely well and whose opponents need to check and recheck their own work very thoroughly.”

Devoting much of his time to restructuring and insolvency issues, this stand-out DVC member “certainly deserves his reputation as a leading Silk” [and has a] “great presence in court” and an ability… “to get answers which get to the main points of a case, qualities which, when taken together give him an edge.”

Noted for his niche strengths in the telecommunications, broadcasting and for insolvency cases, and known for his “very impressive thoroughness” this standout Silk is lauded for his “patient and non-aggressive style.”

Another of DVC’s Silks is pinpointed as definitely a “go-to counsel” for company law and insolvency issues, an area where he is both very much an “academic guru” and a “fantastic, very quick operator, with a lot of commercial sense…” and a “very good strategist.”

One of DVC’s members is identified as a “force of nature” and “one of the best operators at the Bar.” He is recognised as the “man to go to for company matters” and “has a natural rapport with the court.”

Lauded for “uncommon talent and extensive experience” for his level of seniority, this junior has “excellent research skills and written submissions” in the context of “company and insolvency issues.”

One of DVC’s “excellent” juniors is a “very user-friendly barrister,” is very hard-working and “keeps clients calm, reassuring them that the matter is being supported as it should be” and “presents well.” She has a “broad commercial remit [with] particularly focused expertise in company law and insurance.”

One of DVC's members stands out for being a "fantastic, first-class advocate with a lot of commercial common sense" and "a rare combination of flair, wit, incisiveness and fairness." Credited with possessing "best in class" client management skills, he was recommended for being a "go-to Silk for company insolvency matters."

Another one DVC's members was singled out for his "in-depth knowledge of companies litigation and for being a tough opponent [able] to fight vigorously for clients." 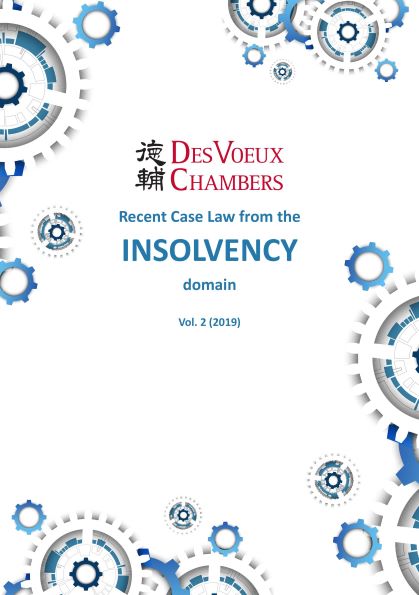 DVC's Ling Chun Wai has been appointed a Member of the Board of Revenue (Inland Revenue Ordinance)  for...

Join DVC's Catrina Lam and Benny Lo for a lively exchange when they speak and moderate as...